With the release of the Codex, we have written an update article for the Tau Troops choice. You can read that here. The below is no longer mathematically absolutely correct, but most of the points still stand.

Last time we reviewed the HQ choices, this time we will look at the different troop choices and their pros and cons.

Tau troop choices are more dynamically affected by range than most of our other choices due to the presence of weapons with similar stats, but different ranges. Tau has never been left wanting for S5 shots, but it’s a matter of how many you get and at what range that differentiates the troop choices for Tau. While on paper, just three troop choices (Strike Team, Breacher Team, and Kroot Carnivores), seems straightforward, but understanding the role that each of these choices can play, and understanding the intricacies involved in each is vital getting the most out of these units. 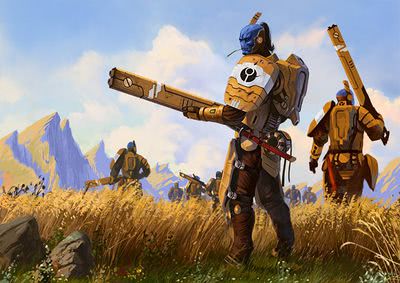 Strike Teams, groups of Firewarriors with long or medium ranged weapons, are the most common Tau infantry that you’ll see. They can choose to be equipped with either Pulse Rifles (30″, S5, AP0, D1) or Pulse Carbines (18″, S5, AP0, D1), come with Photon Grenades, and can take a tactical support turret. Due to their loadout, they can fill the role of a stationary gun line or mobile force. While the below table lists Pulse Rifles, the same is true for Pulse Carbines since they have the same strength, AP, and damage.

The above math was done with a full unit of 12 Firewarriors and you can see that (no surprise) the most point efficient choice is the Strike Team in rapid fire range with a Cadre Fireblade’s bonus. I did take into account the additional cost of the CFB. Since the CFB can buff more than one unit at a time, brining more than one unit of Strike Teams will only make them all more point efficient as they would then share the cost of the CFB.

The two loadouts seem similar at first but feature some important differences. The Pulse Rifle is a 30″ rapid fire weapon, while the Pulse Carbine is an 18″ assault weapon. That means that you can get up to three shots (rapid fire plus CFB) with the Pulse Rifle at 15″, which is definitely close enough such that your enemy could feasibly move and then successfully assault you. While their non-rapid fire range GEQ and MEQ points per would are about average or only a little worse than previous units we have looked at, if you’re taking Pulse Rifles, you’re wanting those extra shots that you only get at 15″ to make them much more efficient.

Being a rapid fire weapon, you cannot normally advance and still fire with a Pulse Rifle, which can limit the unit’s mobility. On the other hand, the Pulse Carbine will allow you to get two shots at an effective range of 27″ (6″ movement, plus a conservative average advance of 3″, plus the 18″ weapon range). The total damage output is lower at medium range due to the CFB bonus not kicking in for the Pulse Carbine until 9″, but you’ll find that in terms of being able to seize objectives, move further, and still shoot – the Pulse Carbine is a good choice. This does require some markerlight support to negate the penalty to advancing and shooting assault weapons, but when does a Tau army (sans Commander spam) not need markerlight support?

It’s also worth nothing that if you plan on playing your Strike Team as a gun line, the support turret is worth consideration, especially the SMS variant. Other choices include accompanying the unit with Tactical Drones or a Guardian Drone. On average, you could expect the Guardian drone to save two models before they’re wiped out, and it can be combined with other things like the Ethereal’s Sense of Stone to help make your unit fairly hardy. 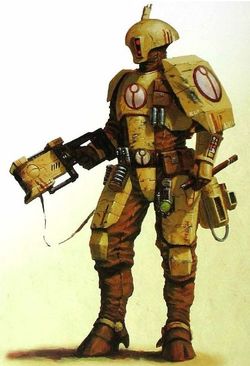 Firewarriors with Pulse Blasters (shotguns), Breachers are most effective at very close range. The trick is getting them there. The Pulse Blaster has three weapon profiles: Long (15″ to >10″, S4, AP0, D1), Medium (10″ to >5″, S5, AP-1, D1), and Short (5″ and under, S6, AP-2, D1). They also have Photon Grenades, can be optionally accompanied by a Support Turret (but for reasons previously mentioned, we have left that out of calculations), and can take a Guardian drone.

A full unit of 10 Breachers on their own is very point efficient, even when not at their closest range. However, it’s a pretty common strategy to put them in a Devilfish to run them up the field and then disembark them within 5″ of their target. This naturally lessens their point efficiency, but not unbearably so and it does increase their survivability considerably, plus gets them to where you need them faster.

Unlike Strike Teams, Breachers really only have one role – run up and kill something. This is due to the fact that they only have one main weapon choice and it scales with range. At first, you would expect their Guardian drone to be better, because on Breachers  it works on a 5+ instead of 6+ for Strikers. However, due to the smaller unit size (10 versus 12), it actually works out that you still, on average, save two models.

Kroot Carnivores are the bipedal version of the Kroot. Their Kroot Rifle is average at shooting (24″ rapid fire, S4, AP0, D1) and due to the fact that they hit on 3+ in close combat and the Kroot Rifle effectively gives them one S4 attack, they represent some of the best cannon fodder/bubble wrap units that we have.

Kroot actually have respectable firepower, but the main problem is that you’ll struggle to keep them alive long enough to take advantage due to their 6+ save. For that reason, their primary use is not killing things, but to act as deepstrike-denial, bubblewrap, and a light skirmish unit at best. In my games, I’ve been please if my units of kroot did any of the above – killing something with them is just a plus.

Their “before the game” 7″ move plus their standard 7″ move allows for getting into rapid fire range on the first turn in most cases. If you have first turn, rapid-firing kroot can help you get some extra mileage out of them.

Taking unit sizes greater than the 10 man minimum is not recommended, purely due to leadership issues. If you have lots of other infantry, enough to warrant an Ethereal or Aun’Va, of course their aura’s would benefit Kroot too, but their impact would probably not be enough to warrant taking an ethereal just for the kroot alone.

Next time we will bring you the third installment in the series analyzing the choices available for each battle role.

If you like what you’re reading, please consider following on twitter or via email in the sidebar to your right. If you have specific questions that you’d like us to address here, about Tau or other armies’ units, fill out the form below. Thanks for all the feedback and help in making sure my math is accurate and honest.