Last time we looked at the Elite slot for Tau’s slot choices. If you missed that, you can catch up here. We will continue going down the list – this time with the Fast Attack slot.

But before we begin, I’d like to give a shoutout to Battle Brothers of the GCWA blog. They have a lot of content related to Tau as well. Here, we often talk about point efficiencies – I think their article on building tournament list is a great next step to utilizing the point efficiencies you read here. Check them out!

Tau is full of good choices for our Fast Attack slots and for this reason, my of my lists seem to feature at least on Outrider Detachment. Whether I’m supporting my main forces with drones or pathfinders, or melting face with the Y’vahra, there’s lots to look at in the Fast Attack slot.

In addition to using our usual list of assumptions (GEQ, MEQ, Tank definition, rapid fire range, factor in cost of mandatory drones, average damage, etc.), we will also assume that spending time analyzing pistols is useless as the pistol choices for these units are either the same stats as the regular weapon but with shorter range (Pathfinders), or grossly inferior to the other weapons (Y’vahra). My final assumption is that you’ve grown just as tired of reading my assumptions as I have grown of typing them. If you’d like the full list of assumptions used, check out our previous article which lists them out. Lastly, if you have any questions about how we calculate the point efficiencies, check out our math, which you can find here.

One specific thing we did NOT take into account is the extra damage resulting from some weapons on a To-Wound roll of 6. 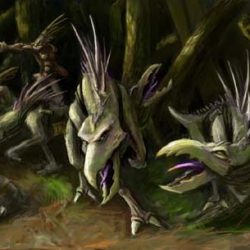 I’m a big fan of the Kroot Hounds and it’s not just because they have great point efficiency against GEQs. A 12″ movement and the ability to reroll failed assault rolls when assaulting a unit that’s suffered an unsaved wound this turn is great. Kroot Hounds can be the cheap meat shield and speed bump that our army needs. Plus, they are great at engaging melee units just for the sole purpose of getting the enemy to have to fall back, and thus (barring some special rule) not shoot the next turn. Dirt cheap at 4 points a piece, Kroot Hounds can find a home in nearly any list. The only down side is that their actual models are crazy expensive and hard to come by. I’ve been building an army of Kroot Hounds out of Chaos Warhounds, (which can be found even cheaper on Ebay) and loving them.

If you’ve read the Getting Enlightened article then you already know that I think pathfinders are amazing and our best source of marker lights. If you haven’t, go read it.

Pathfinders are efficient and on par with our infantry choices in terms of lethality. But pathfinders are also a great source of markerlights, which has me wondering if I could substitute all infantry for pathfinders in a test-list. Pathfinders do have a 5+ armor save, compared to Firewarriors’ 4+, which is their biggest (and one of the few) downside when comparing them to our infantry choices. Because of this, the biggest struggle with using Pathfinders is just keeping them alive. You’ll want to consider something like a Tidewall Shieldline to allow them to markerlight targets somewhat safely. If you’re considering bringing any of the other weapon loadouts on them for some diversity, the Rail Rifles are not bad, but having a 5 point model with a 20-something point gun just feels like you’re asking for a bad time. Some sort of transport or extra defensiveness is absolutely mandatory if you’re taking any of their exotic weapons. 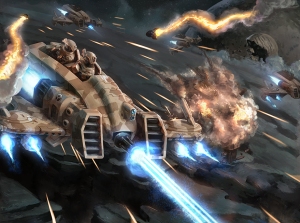 The Piranha is probably just slightly ahead of the middle of the pack. Keeping it’s drones attached so as to take advantage of the Piranha’s BS4+ is encouraged, and the Piranha can help give you a couple more Seeker Missiles, which I’m a fan of. However, it’s not especially durable, and the fact that the models stay one unit even after deployment, unlike some of the Astra Militarum vehicles, means that if one Piranha in a multiple Piranha unit dies, not only will at least one other piranha will be in range of the possible explosion (they have to be within 2″ of each other), but you run the risk of losing more models due to morale.

One interesting tactic to use with Piranhas is done with the Mont’ka ability and helps get drones across the table faster. If Drones were on their own, they would move 8″ + d6″, hit on 5’s unless you had a DC. But if you keep the drones embarked on the Piranha, they move 16″ + d6″ and don’t need the DC to still hit on 4’s. Plus, while embarked, the drones are protected by the Piranha’s T5 chassis instead of their regular T4.

I definitely think the Piranha could use some tweaking in the Codex. As it stands right now, you may have a few reasons for taking one (mobility and Seeker Missiles), but there are certainly reasons to pass them by too.

As a Tau player, you can never, and I really do mean never, have enough drones. Tactical drones as a category are made up of Gun, Shield, and Marker drones. Gun drones are sources of near-infitine dakka by pairing them with a Cadre Fire Blade. At half range (9″) and with a CFB, these monsters put out six shots a turn. Sure, they only hit on 5’s unless a drone controller is present and they have to target the nearest enemy unit, but these are limitations that can easily be overcome once you see the fist-full of dice you get to roll. One of my favorite tactics when using 18″ apart deployment zones, is to start a drone swarm right on the edge of my deployment zone near both a Commander (with DC) and a CFB. You’ll get to advance into rapid fire range and then hit on 4’s.

Shield drones are also pretty useful. If I’m planning on Manta Stiking a commander in, I always bring two shield drones with him to help soak up more firepower. Now that shield drones get a 5+ FnP in addition to their 4++, you have 2/3 chance in either making your invuln or FnP rolls. If you’re having a hot day with the dice, those can make for some really frustrating models for your opponent to have to remove from the board. If you’re taking swarms of Gun Drones on their own, mixing in one shield drone can help as well, as you would allocate the wounds to that unit to the shield drone first and hopefully help soak some wounds.

As a counter-point to this, one reader has remarked:

“I think you are missing the versatility of the marker drone versus pathfinders. Not only do they move more, have a higher toughness and save, but can take wounds for suits and characters. Sure you would always like to put pathfinders in cover, but that limits where they can go, and cover might not be an option.”

No longer the laughing stock of the Tau forces, The Vespid have a niche, legitimate role now as GEQ and MEQ killers. They can deploy just like suits with Manta Hold, but get a different name for the ability – “Plunge from the Sky”. They are lightning fast with their 14″ movement and are infantry, so can benefit from cover to give them a Sv3+. The problem is that they each only have one wound, so every failed save will be a 15 point model down. They can make good “scalpels” for the precision removal of some light infantry units, and then can be useful scooting off to grab an objective. Overall, Vespids make for an effective light skirmish unit.

Or should I say “Y V A H R A”? The king “burninator” of all the burninators. This suit kills whatever it looks at, due to its incredible damage output of both guns. Fun fact: it’s got the highest Point Per Damage on Tanks that we’ve looked at. Another fun fact, with the Nova profiles for both of its weapons (no ATS), you’re looking at an average of almost 16 damage a turn against a Tank, if using both weapons at the same target. That’s enough to reliably take out a Leman Russ every turn of shooting. If something is stupid enough to charge you, you can expect to do about half that damage during the overwatch. This thing could theoretically take out a Knight in one turn, though your dice will have to be hot.

It’s no wonder we are seeing them all over the table, combined with Commanders and swarms of drones. The main downside to the Y’vahra is that it will draw a lot of fire. Your main job when fielding one will be keeping it alive, so lots of drones surrounding it, preferably shield drones, are a must. As a result, you probably won’t be taking ATS on it, because you’re probably going to need a Shield Generator, Stimulant Injector, or both, but I thought I’d include ATS in the calculation for fun. I would say that it’s short weapon ranges are also a drawback, but its base movement speed is 18″, ***. Overall, if you’ve never tried out one of these, proxy it with one of the many Riptides you’re no longer using to give it a spin and never look back.

***This is actually not true. The Flamer is a Heavy weapon and thus you cannot normally advance and fire a Heavy weapon. You can, however, still move fully and still auto-hit with the Flamer.

Did you need a really fast, flimsy, source of “all or nothing” marker lights? Then the Tetra is for you! The same toughness as the Piranha, but with only four wounds means that you’ll probably be relying just as often on your 18″ movement to protect you as your Toughness and Sv4+ value. The weaponry is laughable and not why you’re taking this, plus it can’t take Seeker Missiles. I’m just not a fan of the High Intensity Marker Light, which you can read more about here, and as a result, the movement and chassis just don’t do it for me.

Trading the two drones that the regular Piranha gets for a higher toughness and wound pool, the TX42 is really just a fast, durable platform for its weapons. However, the increased mobility and durability doesn’t make up it’s sub-par point efficiency an inability to take Seeker Missiles. Regular TX4 Piranhas or just suits with Plasma Rifles would usually be better choices than the TX42.

While normally, I’d highlight overall most-efficient units, in this case I won’t because it would be a little misleading. For example, the Kroot Hound is technically the most point efficient, but it’s also only 4 points and takes two, on average, to kill a GEQ. On the other end of the spectrum, we have the ~400 point Y’vahra that will kill, on average, 15 GEQ’s a turn, but if you’re doing that, you’re probably not using it the most efficiently. By and large, Tau has great choices for the Fast Attack slot, even if they aren’t all winners. It will take some of the above math, and some play testing to see which best fit your play style.

If you like what you’re reading, please consider following on twitter, facebook, instagram or via email in the sidebar to your right. If you have specific questions that you’d like us to address here, about Tau or other armies’ units, let me know below. Thanks for all the feedback and help in making sure my math is accurate and honest. Check out our next post in the series on Heavy Support!