Last time we looked at all the cool Tau fliers and the Devilfish – you can read more about that here. This time we will have our final article in the Codex Update Battlefield Slot series by looking at Tau’s fortifications and the Lord of War (LoW) choices. The fortifications for Tau are both lethality-driven and support-focused, so we will again break the article up into Synergistic and Combat choices.

This is an update to our previous Flier/Transport analysis and a lot of what we originally said, still holds true now. You may notice that some information is suspiciously similar to our original article, and that’s on purpose.

First though, our assumptions: 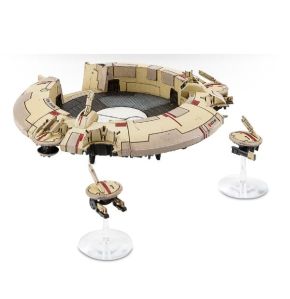 The droneport is an interesting unit. It can transport up to ten models and four drones at a blistering pace of 6″ per turn. The ten models can be any infantry and the four drones can be any combination of Shield, Marker, and Gun drones. The droneport itself is moderately sturdy with a T6 Sv4+, and W10. As just a transport, it’s not great due to the limited movement range, but where I see the most value in it is through the open-topped rule (which allows the units embarked in it to shoot while embarked) and the drones themselves (which get to use the BS of one of the passengers. How do you use one? Put a Cadre Fireblade and a unit of 9 pathfinders (your choice of Ion or Rail special weapons) in it, with four marker drones, and you have yourself a decent level of markerlight support – the drone port will help keep your flimsy pathfinders alive longer and the markerlight drones can use the Fireblade’s BS, not to mention the Fireblade’s own BS. It’s not a cheap solution though, as the Droneport stock (without drones) is already 70 points. 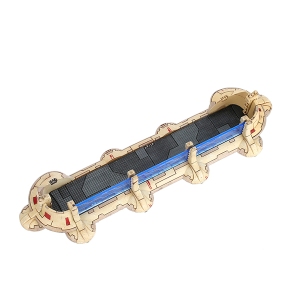 With stats identical to the Droneport, the Shieldline is actually my preferred dedicated method of keeping pathfinders alive. It doesn’t come with drones but it does have the Tidewall Field special rule, which allows save rolls of 6 to cause a mortal wound to the shooting unit. My only problem is that its Sv4+ is a regular save, not an invulnerable save, thus it can be reduced. This definitely limits the lifespan of this unit. However, if you load up one or two of these with pathfinders, you give your opponent a hard decision: do they shoot at the hard casing protecting your pathfinders, and potentially end up just destroying the transport, while your pathfinders remain intact? or do they shoot at your units that are actually killing them (Riptide, Commanders, etc.)? When I have the points to spare and need to keep my markerlight sources alive, I’ll consider the Shieldline.

The Tidewall can take an optional Platform that doesn’t reflect shots, but does have a higher T7, so is slightly more resilient. An important distinction is that the Platform does explode, while the Shieldline doesn’t. A lot of times people see the Explodes ability on the Shieldline dataslate and just assume that it applies to the Shieldline, but it does not. 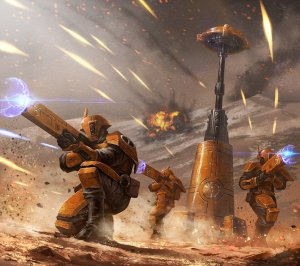 A forgeworld fortification that we have previously touched on in our markerlight article. However, that discussion did not take into account septs. The Sa’cea reroll puts this is a much better position than it was in its previous state. Now, it has 75% chance to place 3 markerlight counters on its target, factoring in the Sa’cea reroll, and a 25% chance for zero markerlights. Plus, it grants rerolls of To-Hit rolls of 1 for one unit within 3″ of it each Shooting phase. It’s not particularly durable at just T6 and three wounds, but if your enemy is shooting at it, they’re not shooting at your more valuable units. 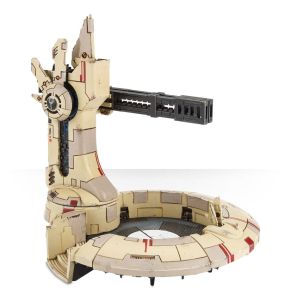 I’ve heard a couple of people rave about the Gunrig. They claim that it’s SO CHEAP for what it does. It did get cheaper with the Codex, which, along with the Sa’cea sept tenet, help position the Gunrig from a “never take” to a “take in friendly games”. The big downside you’ll find with the Gunrig is its high level of variability both in hitting and dealing damage. With the Sa’cea sept reroll, the Gunrig will hit, on average, about one of its two shots (it’s BS5+). Wounding with its S10 Railgun won’t be difficult, but even when you successfully do that, you’ll do anywhere from 1 to 6 damage with each successful wound. You can theoretically invest a lot into getting this to hit and wound only to roll 1-2 damage. On the other end of the spectrum, you could get lucky and do up to nearly 12 damage. The Gunrig is a gambler’s plaything and I’d rather take a “sure thing” rather than leave the efficiency of my units completely up to the dice gods. 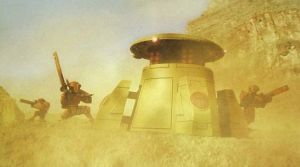 This FW model is before my time. It’s also quite a weird unit. It can’t move, it can’t target anything but the nearest enemy model, it can hit on a 5+ on overwatch, and it has a regular BS5+. I have no clue as to how you might use something like that effectively. It does have The Greater Good rule, so if you can draw an charge near it, you stand a slightly higher chance at killing stuff in overwatch. You could couple that with either a Hazard suit or a Pathfinder’s unique drone to reduce the charge distance, but this seems like a really fringe case, and even then, it’s only ok, helped slightly by the reduced cost of the Burst Cannons in the Codex. It’s not like you’re looking for things to fill out a fortification slot in a fortification detachment, though. 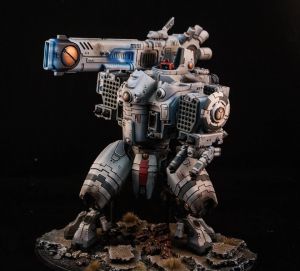 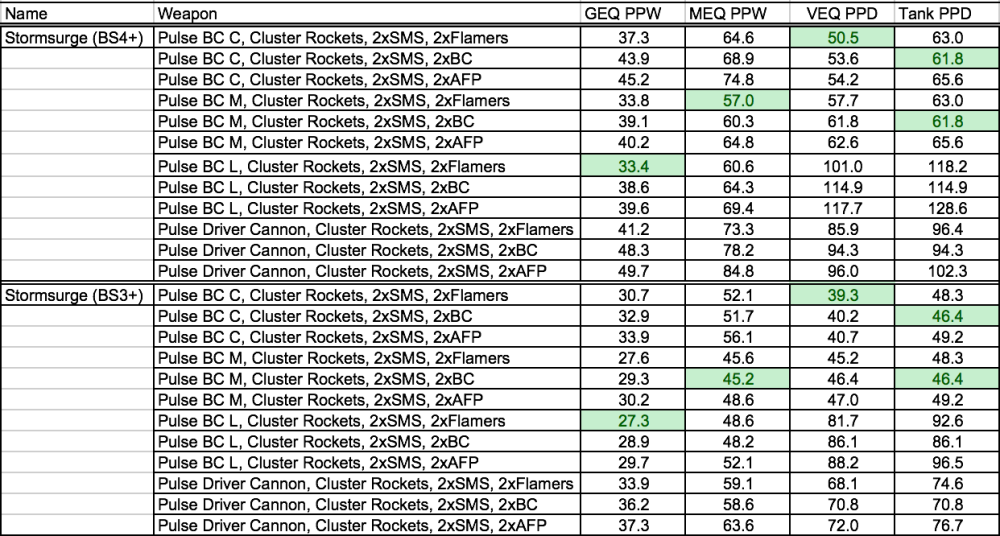 The Stormsurge is the only LoW in the Codex and quite the iconic “giant robot” for Tau. In the above table, I have assumed you would take ATS, Shield Generators, and Velocity Tracker as your three support systems, as I think this makes the most sense now that Stimulant Injector is not longer a support system. I’ve also not factored in its four one-time-use destroyer missiles, because 1) they come stock, and 2) the are one-time use. They function just like Seeker missiles in use and how much I recommend them.

My opinion of the Stormsurge is…better than it was in the Index, but still mixed. I want to like it. The model is great. Mathematically, it doesn’t lag too far behind other units, but my biggest current gripe with it is that it isn’t a <battlesuit>. This results in a few things – the biggest one being that it cannot benefit from Savior Protocols. This means that the T7 Sv3+ (4++ with the 40 point Shield Generator) is very susceptible to being shot off the board by things like mass las cannons. It’s also a giant (literally and threateningly) target. Your opponent will want to shoot it. Furthermore, a lot of great stratagems specifically work for <battlesuits>, so don’t benefit the Stormsurge. At BS3+ (achievable with anchors, 5 markerlights, or against something with <Fly>), it’s pretty decent in terms of point efficiency. However, that assumes you are in range for all its weapons, which you won’t be 100% of the time. If you can somehow provide a more-threatening target for your opponent or trick them into not shooting at it, you should see a decent return on your points spent. 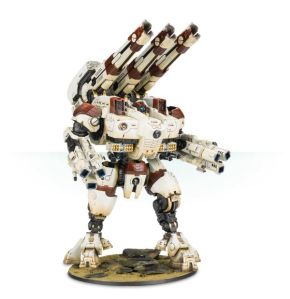 The Tauar doubled its points after Chapter Approved last winter. At its original points, it was a beast. I didn’t realize how point efficient it was, plus it would last forever while surrounded by shield drones. DOUBLE PLUS, it has to lose about 20 wounds before it drops to BS3+. I don’t have one. But I want one at the original point cost after doing this analysis. Even at it’s updated point value, it’s not bad, per se. Not the best, but it’ll still be just as hard for your opponent to remove it from the battlefield. Note, I didn’t include Crushing Feet in the analysis because I thought that generally, if your Taunar is in close combat, you’ve done something wrong.

If your new to Tau or not sure what this is, go look up a scale comparison. This thing is huge. I believe I’m correct in saying it’s the largest model that FW makes, at something like 3 and a half feet wide. Or, you know, as wide as about 42 Firewarriors, as wide as a 3 year-old is tall, etc. etc. It’s massive. Plus, it can carry 55 <Infantry> or <Drone> models in its upper deck, and either 145 <Infantry> or <Drone> units in it’s lower deck, PLUS four of any combination of Devilfish/Hammerhead variants. And for lulz, the embarked Devilfish can have models embarked on it while itself embarked in the Manta too. All that being said, this thing is not brought for firepower. It’s brought to act as a transport and a statement that you’re the king of all nerds forever and always. If this has piqued your interest and you now want one, just know that if you have to ask how much one is, you’re not meant to have one. Also worth noting is that I didn’t include seeker missiles in the analysis, because they’re great and you should always take them.

Most of the fortifications are not mathematically poor – where they fall off is the impact that they have on list design. In many competitive settings, lists are limited to just three detachments. You’re sacrificing a whole detachment just to take an average-at-best fortification. In my book, that’s a bad deal.

With the exception of the Stormsurge, the Tau LoW choices are probably limited just to Apoc games and their armament and abilities just don’t equate to the kinds of things you’ll regularly find in a 2k (or 1750) competitive game. The Stormsruge would be really good if it were a <battlesuit>. It would also be pretty difficult to remove from the table as well, which is maybe why that’s the case. However, Riptides are <battlesuits>, which seems like a somewhat comparable unit. Who knows.

Wow, what a ride. We’ve made our second lap through the T’au units, now reflecting Codex updates. We’ve even branched out to topics about various hobby aspects. I hope you have learned a bit along the way, I know I sure have. If you’re interested in reading the other article in the series, here are the links:

So what’s next? We will continue to write about useful, entertaining, and educational topics, through list review from recent tournaments, to further T’au articles, to hobby guides. The possibilities are endless.

Did you agree with any of the analysis? Did you disagree? Do you think I made a mistake? Do you have a topic you’d like to see us write about? PLEASE let me know in the comment box below.

If you like what you’re reading, please consider following on twitter, facebook, instagram or via email in the sidebar to your right. If you have specific questions that you’d like us to address here, leave a comment below. Thank you for all the feedback and help in making sure the blog is a valuable source of information.